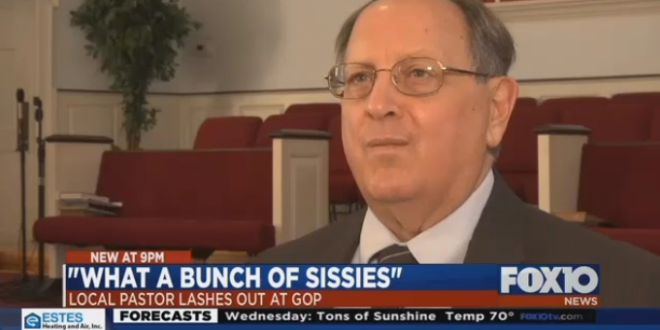 A new hero for Breitbart:

An Alabama pastor is not pleased with the way some Republicans have publicly reacted to a Washington Post report published last week that accused Moore of engaging in inappropriate conduct with four teenage girls more than 34 years ago.

In an interview with Mobile, AL FOX affiliate WALA, Dr. David Gonnella, pastor of Magnolia Springs Baptist Church in Theodore, AL, remains a supporter of Moore despite allegations in the Post’s report. He suggested it was part of an effort to damage Moore’s bid to win the special election for the U.S. Senate seat formerly held by Jeff Sessions.

“It’s funny how the Republican Party is,” he added. “What a bunch of sissies. The Democrats rally around their candidate even when they’re guilty. Republicans want to throw them under the bus on a minor accusation without knowing whether they’re guilty or not.”

Gonnella’s name is among the 53 local pastors listed on a supportive letter posted by Kayla Moore earlier this week. However a number of the listed pastors say they were never consulted about the letter, which is almost identical to a letter they did agree to back in August.

Previous Moore’s Lawyer To MSNBC Host: With Your Background You Should Understand Dating The Underage [VIDEO]
Next Cardinal Timothy Dolan Endorses Web Campaign Calling On Homosexuals To Live Loveless Lives Of Chastity