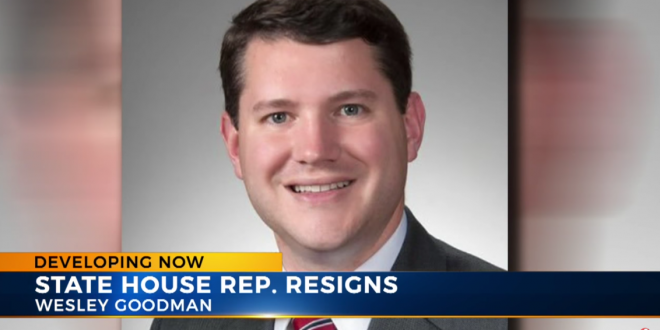 OHIO: Family Values GOP State Rep Resigns After “Inappropriate Behavior” In His Office With Another Man

State Rep. Wes Goodman, who consistently touted his faith and conservative values, abruptly resigned late Tuesday after being confronted with evidence of inappropriate conduct with another man inside his Riffe Center office, the second Ohio lawmaker to fall within a month.

House Speaker Cliff Rosenberger, R-Clarksville, met Tuesday afternoon with the Cardington Republican soon after the speaker became aware of an incident from weeks ago in the lawmaker’s office that, sources said, involved a male in a consensual situation.

No harassment complaint, sexual or otherwise, was filed against Goodman. But someone, reportedly not a staffer, who knew of or witnessed the incident informed House Chief of Staff Mike Dittoe of the situation early Tuesday afternoon.

Goodman, 33, was elected to the 87th district seat in 2016 after working for the Conservative Action Project, a network of economic, social and national security conservatives. He also worked for U.S. Rep. Jim Jordan for more than six years, promoting “promoting constitutional, fiscally responsible, pro-family policies,” according to his 2015 candidacy announcement.

Jordan’s office said no allegations of wrongdoing nor accusations of misconduct were made during Goodman’s tenure there. “Congressman Jordan is deeply disappointed by this troubling news, and believes Mr. Goodman’s resignation was the best course of action for the Ohio House of Representatives, Mr. Goodman’s constituents, and his family,” spokeswoman Melika Willoughby said in an email.

Family. Healthy, vibrant, thriving, values-driven families are the source of Ohio’s proud history and the key to Ohio’s future greatness. The ideals of a loving father and mother, a committed natural marriage, and a caring community are well worth pursuing and protecting.

Life. Human life begins at conception and is to be protected under the laws of God, nature, and the state of Ohio. At the statehouse, this means enacting legislation that reduces abortions. In our cities and towns, this means encouraging communities to provide support and safety networks for single mothers and urging fathers to involve themselves in their families.

According to the AP, Goodman regrets bringing “personal struggles and trials” into his public life. Uh huh.