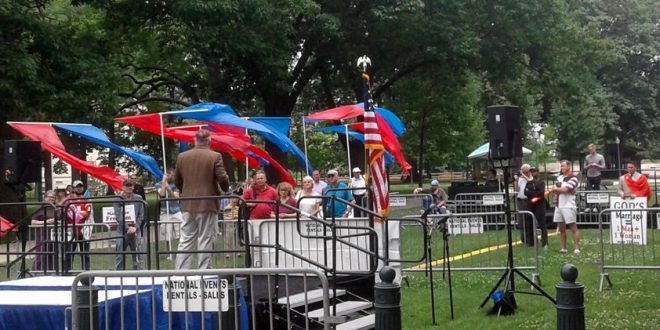 Back in June, after more than six months of near daily money begs and incessant cries of impending victory due to the election of Donald Trump, NOM’s fifth annual anti-LGBT marriage march in Washington DC drew a hilarious 47 attendees (“including babies”) according to a count done by one of our friends on Twitter. So of course, Hate March 2018 has been announced.

I’m pleased to announce that the 2018 March for Marriage has been set! Please mark the date – Saturday, June 23rd – in Washington, DC. The annual March for Marriage is an important milestone in our ongoing efforts to restore marriage to the law. It provides us an opportunity to remind the Supreme Court, our elected officials and the American people that marriage was wrongly redefined in an illegitimate, anti-constitutional ruling in 2015.

It also gives our supporters the opportunity to come to DC to stand strong for the beauty and truth of marriage as the union of one man and one woman. It’s this foundational institution that forms the glue to hold couples, families and our entire society together, binding men and women to each other and ensuring that any children born of their union have the opportunity to know the love of their mother and father.

Putting on the annual March is an expensive undertaking, and we would appreciate any support you can provide. If you are able, please also consider becoming a Sustaining Member of NOM by pledging a monthly donation to us of any amount you choose. The revenue from Sustaining Members provides a stable base of funding that helps us plan for activities like the March for Marriage.