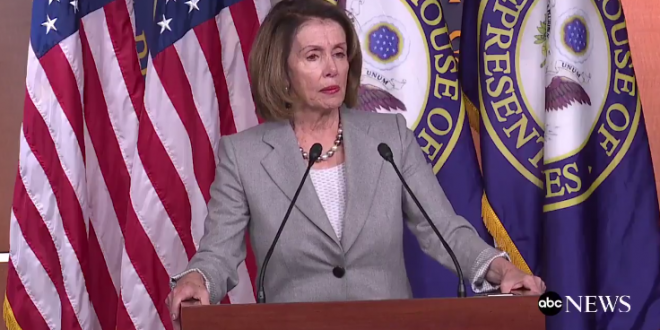 House Minority Leader Nancy Pelosi on Thursday upped the pressure on Rep. John Conyers, who is facing multiple accusations of sexual misconduct and a House Ethics Committee probe, by calling on him to resign from office — a change in her position from just days ago.

Pelosi’s comments are a stark turnaround from her stance on Sunday on NBC’s “Meet the Press” when she praised the Michigan Democrat as an “icon,” questioned who his accusers are, and said the Ethics Committee probe should be allowed to go forward.

“I said he should resign,” Pelosi told reporters on Thursday. Earlier, Conyers’ political consultant said the lawmaker had been hospitalized in Detroit. Sam Riddle, the consultant, told WDIV-TV that Conyers, 88, was hospitalized due to stress and he blamed the “media assault” stemming from the allegations against the lawmaker.

Crazy news day continues with Nancy Pelosi now calling for Rep. Conyers to step down: “No matter how great a legacy there’s no license to harass or discriminate. In fact it makes it even more disappointing .”

On Sunday, she called him an "icon." Today, Nancy Pelosi called for John Conyers to quit https://t.co/ncvDqZarCX