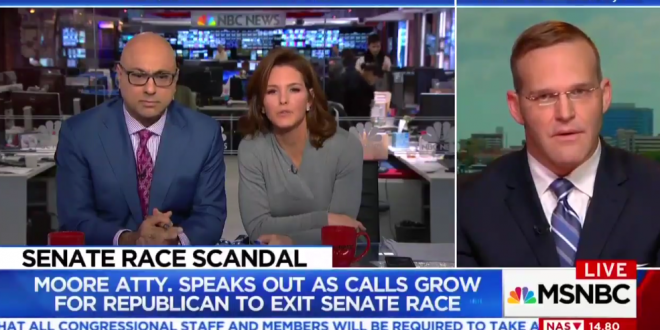 Moore’s Lawyer To MSNBC Host: With Your Background You Should Understand Dating The Underage [VIDEO]

“Culturally speaking there’s differences. I looked up Ali’s background, and wow, that’s awesome that you have got such a diverse background, it’s really cool to read through that,” attorney Trenton Garmon said when asked why Moore would need permission from girls’ mothers to date them.

Velshi was born in Kenya to parents of Indian descent and grew up in Canada.

Roy Moore’s lawyer suggests Ali Velshi’s “background” would help him understand why Moore would date underage girls. Ali Velshi grew up in Toronto. Stating the obvious, but a grown man “dating” a 14 year old is illegal in Canada too. pic.twitter.com/SGjhJd5Xrf

Wow. Not sure where Roy Moore’s lawyer was going with this. Cringe worthy. pic.twitter.com/O3QfSI9J6u

In addition to being racist toward Ali Velshi, Moore’s lawyer cites the fake “Lenny Bernstein” robocall on MSNBC: “Robocalls are now being made asking for people to come forward against Roy.” Challenged awesomely by @SRuhle, the lawyer says, “There’s been stories reported.”

Uhhh, Roy Moore’s lawyer, on MSNBC, appeared to proactively confirm that there have been complaints about Moore’s conduct at the mall: pic.twitter.com/CNftjRcx5J

Roy Moore's lawyer says that @AliVelshi's background should lead him to understand why Moore would date underage women. Ali is from Canada, but I think Moore's lawyer is referring to his Indian heritage. pic.twitter.com/3SrMwtLIEu

Came from the inappropriate reference to @AliVelshi's background. Stayed for the suppressed look of "Watch Yourself" on Ali's face. https://t.co/N7IRoMzkPJ