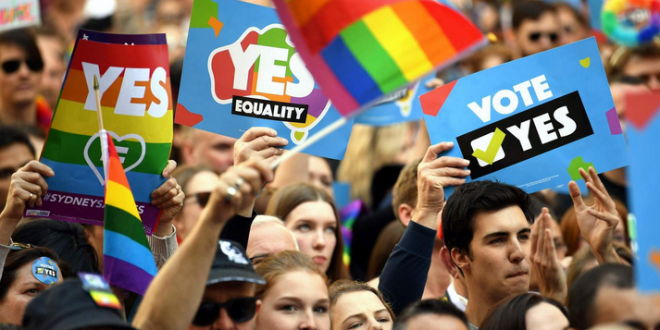 The highly-anticipated result of Australia’s non-compulsory postal survey on same-sex marriage will be announced at 6PM New York City time, which is 10AM tomorrow in Sydney.

The man with the golden envelope, containing the final tally, will be Australian Statistician David W. Kalisch. Ahead of the public announcement, Mr Kalisch will inform Finance Minister Mathias Cormann, as well as a select number of representatives from both the Yes and No camps.

A poll in the Australian on Tuesday, the last before results day, showed the Yes vote on 63 per cent, a figure that has edged up as the campaign has continued. Yes voters will be hoping the polls are accurate, and not some Brexit-style aberration.

The No camp will, of course, be hoping for the exact opposite. But they would settle for a result over 40 per cent. Tony Abbott has said this would be a “moral” victory — if not, you know, an “actual” victory.

Liberal senator Dean Smith lodged a notice of motion for the Marriage Amendment (Definition and Religious Freedoms) Bill to be brought on, one day after the result of the national survey is released.

The motion, co-signed by Labor and crossbench senators, also seeks to put the bill at the top of the schedule for the final fortnight of parliament starting on November 27. The motion also seeks for the bill to have precedence over all government and general business.

The live ABC stream below is inexplicably muddy. You might have to refresh this post to turn on the Mardi Gras clip minutes before 6PM New York City time.