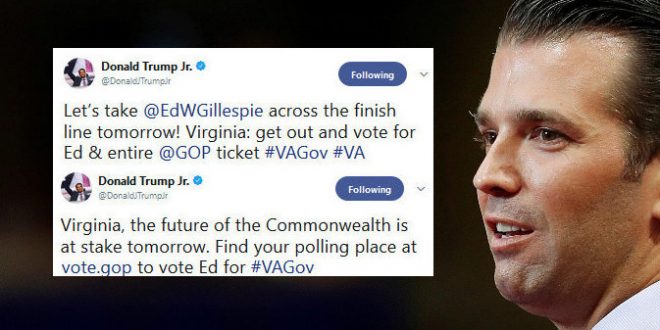 Junior: Vote For The Republican Tomorrow

Donald Trump Jr. on Tuesday urged Virginians to get out and vote for Republican candidate Ed Gillespie for governor, mistakenly telling them twice that the election is Wednesday. CNN host Jake Tapper quickly pointed out that Trump Jr. had the wrong day, but a few hours later, the president’s son made the same mistake.

Let’s take @EdWGillespie across the finish line tomorrow! Virginia: get out and vote for Ed & entire @GOP ticket #VAGov #VA

Think you mean today not tomorrow —

Virginia, the future of the Commonwealth is at stake tomorrow. Find your polling place at https://t.co/j7EyqNhth4 to vote Ed for #VAGov

Previous Christian “Prophet”: God Will Kill Two Former Presidents And Imprison The Others For Daring To Criticize Trump
Next Scotland Apologizes For Gay Sex Convictions