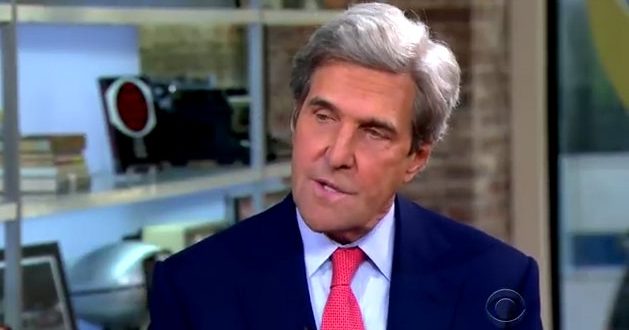 John Kerry: It Was Trump’s Rhetoric That Made North Korea Decide “Hey, We Need A Nuclear Bomb”

Former Secretary of State John Kerry said in an interview scheduled to air Monday that President Trump’s rhetoric has given North Korea a reason to say it needs to acquire a nuclear weapon.

“I think what the president needs to do is make sure he’s not feeding into North Korea’s fear of regime change, or of you know — a unilateral attack, or otherwise,” Kerry told CNN’s Christiane Amanpour.

“And I think the rhetoric to date has frankly stepped over the line with respect to the messages that are being sent. It’s given North Korea a reason to say ‘Hey we need a bomb because if we don’t have a bomb, we’re going to — you know — not be able to protect themselves and they’ll come after us.’”

Pres Trump’s rhetoric has “stepped over the line” and has “given North Korea reason to say, ‘Hey, we need a bomb,'” @johnkerry tells me. pic.twitter.com/ZtYM8mARvl

Previous Robertson Blames Mass Shootings On Anti-Depressants: All These Crimes Have Some Nexus To Them
Next Bakker: Christians Will Riot If Trump Gets Impeached