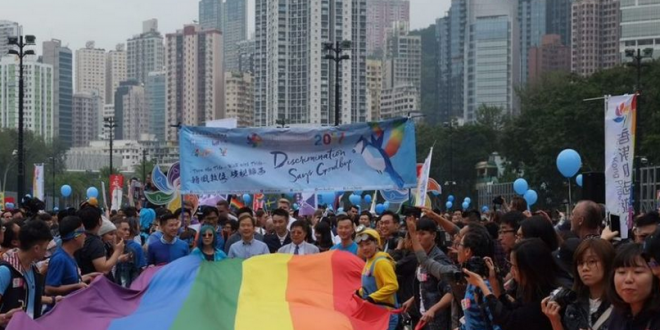 Rainbow flags flowed through the streets of Hong Kong Saturday during the city’s annual pride parade, as LGBT activists criticised authorities for lagging behind on equal rights. This year Hong Kong was picked as the first Asian city to host the Gay Games, while a landmark court decision granted a British lesbian the right to live and work in Hong Kong with her partner. But authorities’ reaction to the winning bid for the 2022 Gay Games was lukewarm and the city’s immigration department has announced it will appeal the case.

An estimated 10,000 joined in the parade, a record for Hong Kong Pride.

Prior to the kickoff, consulate representatives from the United States, Ireland, Canada, Australia, and several other nations hailed the movement for LGBT civil rights in Hong Kong.

JUST IN: Over 10,000 people participated in #Pride 2017 in #HongKong, organisers say 🌈 #lgbt pic.twitter.com/9lvALZRuPr

Now: Thousands of revellers are celebrating #Pride 2017 in #HongKong. pic.twitter.com/qOLfVHsLah

Thank you to all who joined forces with us to be Super Allies at #HKPride #HKP2017 #HongKong #Pride #PlanetofAllies pic.twitter.com/5USHr9CC1g

What do we want? Anti-discrimination legislation! When do we want it? Now! #Pride #HongKong #LGBT #Equality #AsiasSecondClassWorldCity pic.twitter.com/7cZx8r8rcG