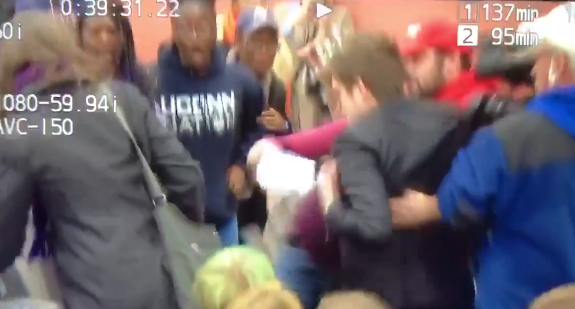 A controversial far-right reporter was arrested Tuesday night following an altercation at a University of Connecticut event where he was speaking, a university spokesperson said. Lucian Wintrich, 29, the White House correspondent for the conservative website The Gateway Pundit, had been giving a speech advertised as “It Is OK To Be White” when a woman approached his lectern and took some papers off of it.

Video from the scene shows Wintrich chasing after the woman and grabbing her in what appeared to be attempt to snatch the papers back. Campus police quickly stepped in and escorted him out of the room. He was then taken into custody and charged with breach of the peace before being released on an $1000 bond, the university spokesperson said. Photos show a crowd of protesters following the police car that took him away.

The Gateway Pundit is calling the woman a “commie.” Sure. For those unaware, the homocon-run Gateway Pundit is perhaps the nation’s most infamous fake news site and regularly posts hoaxes and wild claims which are quickly debunked.

BREAKING: @lucianwintrich appears to attack a @UCONN student during speech after she took something off podium. pic.twitter.com/WAcNYAak7c

1. Stealing people’s notes is dumb and bad.
2. This is a NUTS response to someone stealing your notes.https://t.co/HMD509CTf6

Hey Ben – just curious if you think that if someone steals property you don’t have the right to retrieve your belongings. Asking for a friend. https://t.co/3iyHQZTx1X

It’s really unfortunate that some of the kids at @UConn felt the need to be violent and disruptive during a speech that focused on how the leftist media is turning Americans against each other. Tonight proved my point.