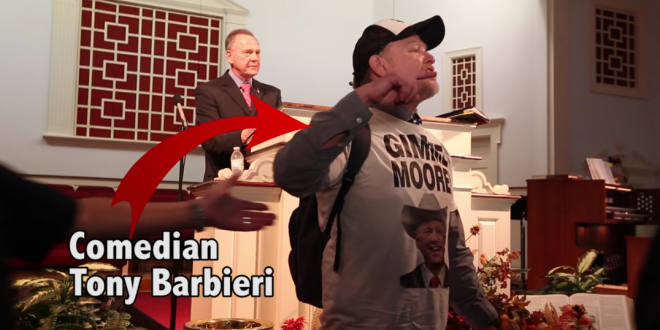 Heckler Interrupts Roy Moore: “He’s A Man’s Man, Does That Look Like The Face Of A Molester?” [VIDEO]

During a speech at an Alabama church, last night Roy Moore claimed that the sexual allegations against him are the work of them there evil LGBTs. And then it got even weirder.

Moore’s speech was interrupted twice, once by a man who questioned why the former judge and his supporters did not believe any of the allegations raised in media reports. “The entire time, all the girls are lying?” the man shouted.

A bizarre back-and-forth ensued as the police escorted the man out of the Magnolia Springs Baptist Church. A pro-Moore supporter then shouted that the former Alabama Supreme Court chief justice is a “man’s man. Does that look like the face of a molester?”

It was later identified that the pro-Moore supporter is the comedian Tony Barbieri, who is famous for his appearances as the character Jake Byrd on Jimmy Kimmel Live! Before the speech, Barbieri repeatedly interrupted individual interviews a TV crew was conducting with Moore supporters as they walked into the church.