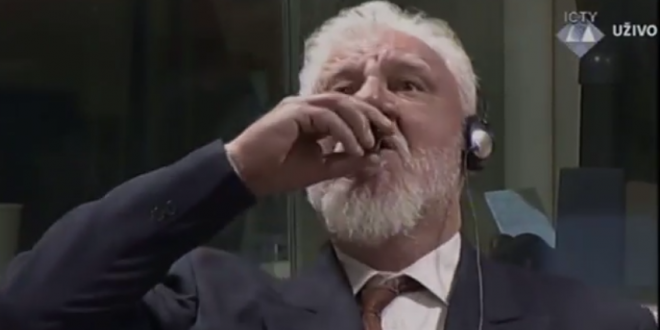 A former Bosnian Croat general has died after drinking a phial of poison at a UN tribunal in The Hague, where his war crimes sentence of 20 years was upheld on Wednesday, a court spokesman has confirmed.

Seconds after his sentence was upheld at the international criminal tribunal for the former Yugoslavia (ICTY), Slobodan Praljak, shouted out angrily: “Praljak is not a criminal. I reject your verdict.”

The 72-year-old then raised a small brown bottle to his lips, and drank it in full view of the cameras filming the hearing. “I just drank poison,” he said. “I am not a war criminal. I oppose this conviction.”

The official statement from the ICTY said: “Mr Slobodan Praljak, one of six defence appellants in the Prlić et al. case, passed away today in HMC Hospital in The Hague.

Praljak was a former assistant minister of defense of Croatia, and later commander of the main staff of the former Croatian Defense Council, a militia operating in Bosnia. He was originally sentenced to 20 years in jail in 2013.

The Yugoslavia tribunal, created in 1993 by the United Nations Security Council, has prosecuted hundreds of people for war crimes and is scheduled to shut down at the end of this year.

The Yugoslav army targeted Bosnian Muslims and Croats in a brutal conflict that killed more than 100,000 people. The ICTY has played an integral role in shedding light on some of these atrocities, including the 1995 genocide in the town of Srebrenica and the use of rape as a weapon of war.

In a dramatic turn of events, former Bosnian Croat General Slobodan Praljak appeared to drink what he said was poison at the ICTY. pic.twitter.com/V3yZLW5sBT