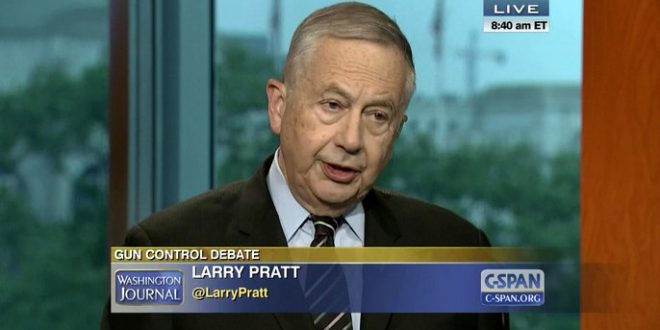 A hate-filled killer is to blame for murdering innocent churchgoers in Texas, not the firearm he used, says the leader of a gun-rights organization.

Larry Pratt of Gun Owners of America says the now-dead gunman was a “hate-filled liberal atheist” who reminds him of the gunman who attempted to mass murder Republican congressmen on a Virginia ball field six months ago. “These are liberal Democrats,” says Pratt, “who are so full of hate.”

But law enforcement authorities have downplayed anti-religious beliefs as a motive, stating publicly that a domestic dispute with Kelley’s ex-in-laws may have triggered the rampage, since he had threatened his ex-mother-in-law days before the shooting.

The Texas shooter was actually registered to vote in Colorado as “unaffiliated.”

PREVIOUSLY ON JMG: In 2013, Pratt appeared on a far-right extremist web show to discuss the secret black army Obama was organizing to massacre white Americans. Later that year he spoke at loony bird Larry Klayman’s rally calling for overthrowing the federal government.

Previous Stephen Colbert Brutally Mocks Junior For Election Day Flubs: It Turns Out Eric Is The Smart One [VIDEO]
Next KENTUCKY: Kim Davis To Run For Reelection After Costing State $222,000 In Bigotry Legal Fees