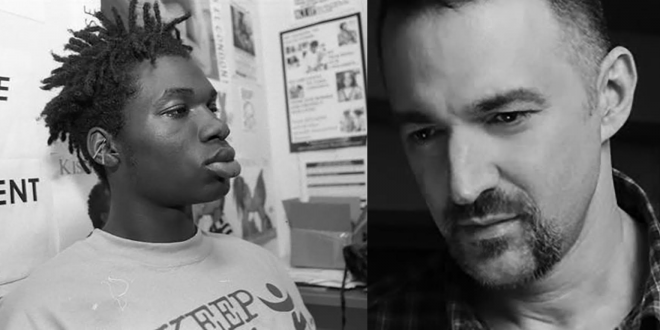 From Joe: Beloved readers, on this Thanksgiving Day, as on every other day of the year, uncountable LGBT kids are living on the streets, turned out by the very people who are supposed to love them. As we do every Thanksgiving, today we turn JMG over to Ali Forney Center founder Carl Siciliano. Please click and read his message below….

Ali Forney was murdered 20 years ago; Ali was shot in the head at 3 am, during a cold night in the first week of December, while enduring homelessness on the streets of New York City.

I met Ali exactly three years earlier, on a December day in 1994, my first day as the director of a Times Square drop-in center for homeless youth.

Ali was a remarkable person. Ali was 19 when we met and had been homeless since the age of 13. Ali was very effeminate and Ali’s mother and had not known how to cope with all the abuse Ali’s queerness brought upon Ali and the family. Today, I imagine Ali — who during various times of a given day self-presented as male or female — would be described as gender non-conforming, but the language to describe variations in gender identity was less evolved in those days.

But what truly revealed Ali’s remarkableness to me was the greatness of Ali’s heart.

Ali, like many homeless LGBT youths, survived through sex work. Ali possessed a fierce determination to protect the other street youths who felt they had no choice to survive but through selling their bodies. Those were the days when HIV infection was a death sentence. Ali was famous for filling a knapsack with hundreds of the condoms we distributed from our drop-in center and distributing them nightly to the scores of homeless queer kids working the streets, imploring them to protect themselves.

I’ll never forget Ali’s immediate instinct to protect the other homeless kids. I remember an afternoon in 1997 when our drop-in center was putting on a talent show in the auditorium of BMCC college, down on Chambers Street. We pulled up in a minivan, and my heart sank as I surveyed the situation. There were about eight of us in the van, me and another staff person, and a half dozen kids. Our youths were all street homeless — those were the days before there was anywhere safe for a homeless queer kid to sleep in NYC without the constant threat of gay-bashing, and youths who sleep in the streets often look unkempt.

It must have been lunch break for the school, and hundreds of well-dressed students lined the long sidewalk we had to walk up in order to reach the auditorium. Looking at the many students, and then at our raggedy youths, some of them obviously LGBT, I felt a great deal of anxiety over what was about to transpire. I feared the students would mock and humiliate our kids, maybe even threaten them. I decided to unleash my inner Tony Soprano; I flexed my muscles and began to walk in front of the kids with a look on my face that said “If you want to come for them you have to come through me.”

Ali took stock of the situation as well. Seeing my anxiety, Ali immediately pushed me aside and walked at the head of our group. Though “walked” doesn’t do justice: Ali, who was wearing these big supermodel sunglasses, thigh-high leather boots, and a big afro wig, sashayed up that sidewalk like it was the only runway. It was a pure weaponization of fabulousness; all the students were so busy gagging at the spectacle of Ali that they took no notice of the rest of the kids. We all meekly followed Ali into the auditorium.

The goodness of Ali’s heart manifested itself in the sense of family Ali was able to create among us. Ali’s heart was at once tender and strong. What most illustrates that strength was Ali’s ferocious dedication to the human value of the other queer street kids in a time when almost nobody treated them as having any worth. In the mid-90’s when Times Square was “cleaned up,” the homeless street kids were pushed out by aggressive policing. This put the LGBT kids, especially the transgender youths, at great risk as they were forced to survive in neighborhoods that were vastly more dangerous for them. In October of 1996, Dion Webster was murdered in Harlem, and in April of 1997, Kiki Freeman was killed in the South Bronx. Both were homeless transgender women, and both were dear friends of Ali’s.

When their murders went uninvestigated, Ali refused to accept that those women should be treated with such contempt. Ali went to the police precincts were the killings occurred, and demanded that investigations be conducted. To this day I remain in awe of the courage it took for Ali, in full effeminate gender-bending glory, to stare down that contempt in those rough and tumble precinct stations.

The last time I saw Ali was about a week after Thanksgiving in 1997. I had worked late at the drop-in center, and finally, around 11pm, went to take the subway home. The subway station was deserted, except for Ali, who was sitting at a bench. I joined Ali, who I learned was waiting for a “date”. We sat together for five or ten minutes. I said I was sad Ali hadn’t joined us at Thanksgiving (it was the first Thanksgiving in three years I hadn’t been with Ali), and said I hoped we’d be together at Christmas. Ali was strangely subdued that night; usually Ali gave forth a great deal of exuberance, but this evening Ali seemed lost and sad.

Finally the train came and I boarded it. I turned around, and as the train pulled out of the station, I saw Ali waving goodbye. That was my final sight of Ali.

On Monday December 5th, when I arrived at the drop-in center, one of my co-workers came into my office and told me that we had just received a call from Harlem hospital. Ali was there, dead. Ali had been found on a sidewalk, shot point blank in the head. The only way they knew Ali’s identity was from an ID card given by our center.

Two of our staff had just gone to the hospital, to verify it was Ali. To their shock, while they were standing by Ali’s dead body, Ali’s mother and sister arrived. Ali had told us their parents were dead. Ali was pretty shameless; Ali had no qualms about admitting to doing sex work or about being addicted to crack. But Ali could not admit to the shame of being left out in the streets, unwanted, by living parents.

What was most unbearable to me was the realization that Ali, who had such a strong sense of family and community, died alone on a frigid Harlem sidewalk. Nobody was at Ali’s side in those final moments but the person who put the gun to Ali’s head.

I was completely devastated. I loved Ali. I admired Ali. It was a brutal thing to work with homeless kids in those days before there was an Ali Forney Center. Without having safe housing to offer the young people, no matter how hard we tried to protect them, most of the kids were becoming more and more damaged. They became addicted to drugs. They got infected with HIV. They were in and out of prison. And every few months someone was murdered. Ali’s goodness, Ali’s loving heart, the sense of family Ali created: they gave me hope and strength to carry on in the midst of all the horrors. When Ali was gone I thought I was going to fall apart. I was seriously tempted to give up on the work; it all just seemed too painful.

But I ended up deciding the only way I could make sense of Ali’s death was to fight to protect the other abandoned young people cast out in the streets.

When I had pulled together a dedicated group of people to create a housing program for homeless LGBT youths, and when we had assembled the resources to begin to offer shelter, it was a no-brainer for me that our endeavor should be named after Ali. For Ali saw the human value in other homeless LGBT youths in a time when few others did. Ali had a relentless drive to protect the other young people. Ali had a loving heart. Those were the values I hoped we would embody.

For months after Ali was murdered, I couldn’t ride the subway without crying, remembering the last place I saw Ali on this earth. So much for my butch image. To be honest, twenty years later I still feel like my heart is surrounded by scar tissue from Ali’s loss. But it has been a truly redemptive thing to house and protect so many rejected LGBT youths in Ali’s name. Over 10,000 youths, from all across the country and all over the world,  have found refuge, healing, safety and acceptance in our programs.

I wish the need for our services was beginning to slow down. It is such an awful thing to see young people denied the love of parents and thrown to the streets. But in these ugly times, when the worst kinds of human bigotry and ignorance are exalted by our nation’s leader, the need for our help has surged. Last year more than 1,400 youths showed up at our doors; an increase of almost 20% over the year before. More kids than ever are showing up from the Southern states; they are coming to us at younger ages, and many have been psychologically tortured in bible camps and through reparation therapy. We struggle to meet the growing demand.

I am deeply grateful to the Joe.My.God community for standing by our side for past ten years, and I love Joe for all his goodness to us, and for giving me the platform of his blog every Thanksgiving to ask for your help. An enormous number of kids have been able to come out of the cold because of Joe and all of you who have been so generous.

For anyone willing to help, donations can be made online via credit card or PayPal.

Or they can be mailed to:

For information about our audited financials and how our donations are spent, go here.

I thank each of you again and I wish you a wonderful Thanksgiving.