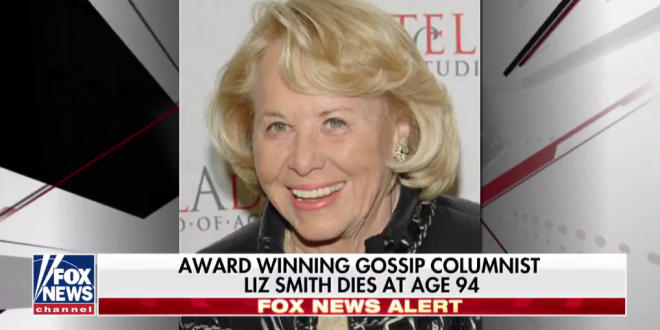 Liz Smith, the longtime queen of New York’s tabloid gossip columns, who for more than three decades chronicled little triumphs and trespasses in the soap-opera lives of the rich, the famous and the merely beautiful, died on Sunday at her home in Manhattan. She was 94. Her friend and literary agent, Joni Evans, confirmed her death.

From hardscrabble nights writing snippets for a Hearst newspaper in the 1950s to golden afternoons at Le Cirque with Sinatra or Hepburn and tête-à-tête dinners with Madonna to gather material for columns that ran six days a week, Ms. Smith captivated millions with her tattletale chitchat and, over time, ascended to fame and wealth that rivaled those of the celebrities she covered.

Smith was openly bisexual, married twice to men in the 1940s and 1950s, and lived for many years with archeologist Iris Love. She also was a famed fundraiser, delivering millions of dollars for the AIDS charity amFAR. As you’ll see in the clip below, her public feuding with Donald Trump was the stuff of New York City’s tabloids for decades.