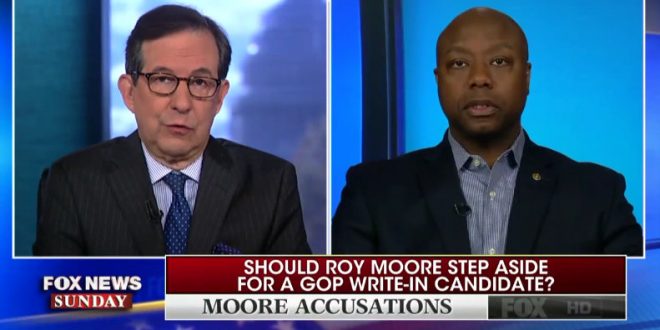 GOP Sen. Tim Scott: Roy Moore Should Drop Out Of The Race And “Find Something Else To Do” [VIDEO]

Sen. Tim Scott said Sunday that it’s “in the best interest of the country” that Alabama Senate candidate Roy Moore step aside, adding that there’s “a strong possibility” that a write-in candidate could retain the GOP Senate seat.

“I certainly think that there is a strong possibility with a new candidate — a new Republican candidate, a proven conservative — that we can win that race in Alabama,” Scott (R-S.C.) told host Chris Wallace on “Fox News Sunday.”

“And it is in the best interest of the country, as well as the state of Alabama, from my perspective, for Roy Moore to find something else to do.”