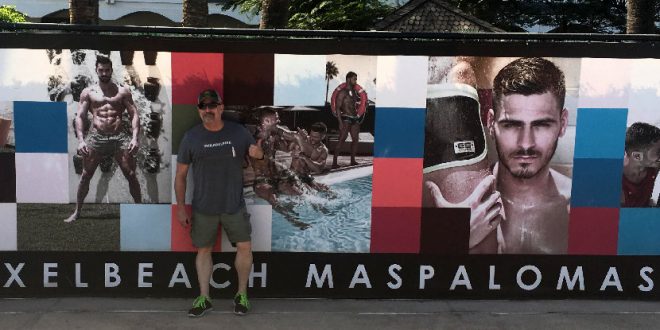 Good Morning From The Canary Islands

Yup. I’m presently in Maspalomas, Gran Canaria, Spain thanks to my longtime buddy Aaron, who surprised me a few weeks ago with a gift trip to accompany him before his vacation days from the company he calls “the algorithm” evaporate at the end of the year.

I told Aaron that the Canary Islands were not remotely on my list of travel destinations, but sure, why not? Aaron had envisioned a relaxing tropical week poolside at the posh gay hotel he selected, however, as we soon learned, our visit coincides with their Winter Pride Festival and this little seaside resort town is mobbed with tens of thousands of European gays.

I did vaguely know that Maspalomas was a popular destination for gay tourists, but I certainly had no idea that it would be like this. Aaron half-pretended to be disappointed that his serene plans were for naught, but he soon began excitedly sharing the bill of this week’s entertainers. (He really likes 90s dance artists.)

I doubt we’ll be as go-go-go as most attendees, but we’ll certainly at least drift the perimeters of the largest events before landing in one of the cozier pubs in the gigantic indoor/outdoor retail center which sports at least a dozen gay nightspots and restaurants.

The Canary Islands are five hours ahead of NYC and I’ll be keeping to my normal work schedule as much as possible, but my days might finish a bit sooner than usual. Tomorrow our hotel hosts the Wet & Hairy Bear Party. Photos will be forthcoming, if you’d like.

And yeah, we were a little worried about civil war.