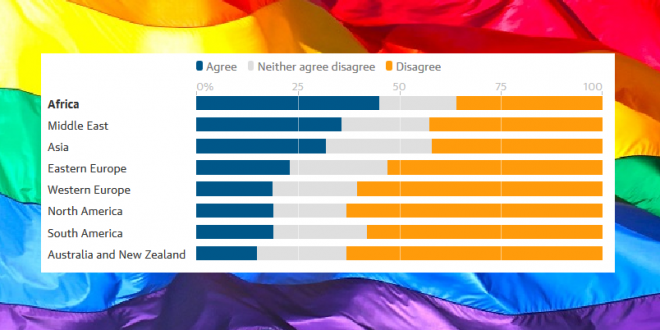 More than one in four people (28.5%) believe that those in same-sex relationships should be ‘charged as criminals’, according to a new survey of over 150,000 people across 77 countries and territories around the world.

Unsurprisingly, the 2017 ILGA-RIWI Global Attitudes Survey showed that there were major differences in views towards sexual and gender minorities in different regions. 45% of respondents in the 15 African countries surveyed agreed that people who engage in same-sex relationships should be charged as criminals, by far the highest percentage around the world.

Among the 1,204 Australians who took part in the survey, two-thirds disagreed that same-sex relationships should be a criminal offence, while 16 per cent of respondents believed it should be criminalised. The rest, 18 per cent, remained neutral.

Of the 77 countries that were part of the ILGA-RIWI survey into global attitudes towards sexual, gender and sex minorities, 25 continue to criminalise same-sex sexual activity.

The report says “in criminalising states, unsurprisingly, the percentages that agree that same-sex romantic or sexual relationships should be criminalised increases substantially”.

Previous AUSTRALIA: Openly Gay Winner Of The Voice Issues Love Is Love Single To Back Marriage Equality [VIDEO]
Next Papa John’s Yanks NFL Advertising Due To Anthem Protests And Then Bitches That Sales Have Cratered