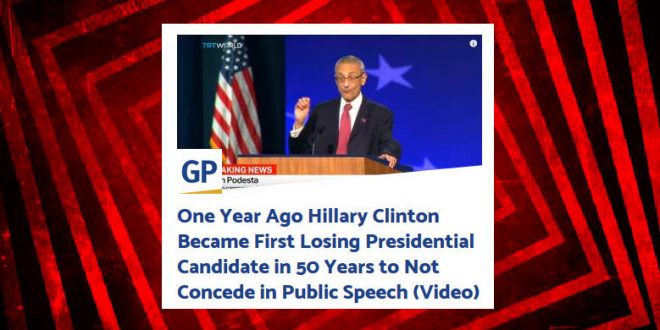 The Associated Press took aim at homocon site Gateway Pundit today in their weekly debunking of fake news. They write:

NOT REAL: One Year Ago Hillary Clinton Became First Losing Presidential Candidate in 50 Years to Not Concede in Public Speech

THE FACTS: Clinton gave a public concession speech the morning after Election Day, although she did not take the podium immediately after the Nov. 8, 2016, race was called for Donald Trump. The claim by the conservative Gateway Pundit blog that Clinton’s delayed concession was the first in 50 years of presidential elections is false.

Democrat John Kerry waited until the next day to publicly concede to Republican President George W. Bush in 2004; Al Gore conceded five weeks after the 2000 election to concede to Bush while the race’s results were contested. Republican President Gerald Ford let his wife, Betty, deliver his concession speech to Jimmy Carter in 1976 because his voice was hoarse from campaigning.