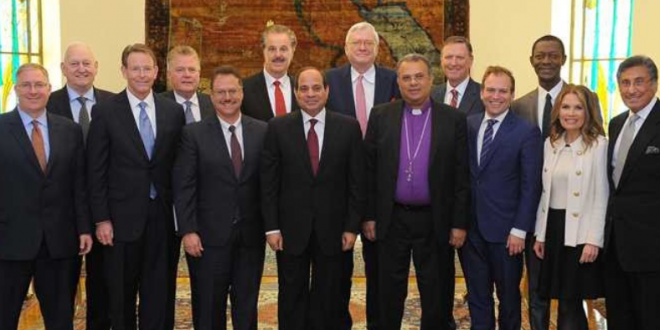 Tony Perkins, president of the anti-LGBT hate group Family Research Council (FRC), joined a group of evangelical leaders from the United States to meet with Egyptian president Abdel Fattah el-Sisi, who has been criticized as a dictator responsible for Egypt’s harshest political repression in the country’s history.

The el-Sisi government is also responsible for the murders of hundreds of protesters and the jailing of thousands of political opponents. And since 2013, it has also arrested hundreds of LGBT people — primarily gay men and trans women — as part of a larger crackdown on social freedoms.

“What’s happening now is unprecedented,” said Gasser Abed El Razek, executive director of the Egyptian Initiative for Personal Rights, which has been monitoring the crackdown.

“I appreciate the opportunity to meet with President el-Sisi to discuss the concerns we have, as American evangelicals, for the plight of religious minorities in Egypt, especially those who are our brothers and sisters in Christ,” Family Research Council President and Baptist Pastor Tony Perkins said in a statement shared with The Christian Post.

From Tony Perkins himself:

Hopefully, the el-Sisi administration will serve as an example in the Middle East. Not too far away, in Iraq and Syria, religious freedom has taken a horrible toll over the last few years. While we’ve advocated for this human right worldwide, much of our focus has been absorbed in recent years by the Middle East, where both Democratic and Republican administrations in the United States have recognized a genocide is occurring against Christians, Yezidis, and others at the hands of ISIS.

More from the SPLC:

The FRC post did not address el-Sisi’s dictatorial policies toward his own citizens or the draconian policies currently being enacted toward LGBT people and their supporters, including a proposed law that dictates prison sentences for those who engage in homosexuality, those who support it, and media that “promotes” or mentions it.

No surprise, really, since Perkins has appeared wishy-washy in the past for the proposed anti-LGBT Ugandan bill (2009), which called for the death penalty in some circumstances.

In 2010, a congressional resolution (H. Res. 1064) was proposed to condemn the Uganda bill and FRC was criticized for lobbying against the resolution. A lobbying report noted that FRC paid $25,000 to deal with “Res.1064Ugandan ResolutionPro-homosexual promotion” (sic).

NOTE: The FRC’s successful move to squash the US House resolution against the gay death penalty was first revealed by JMG with the aid of Gay City News.

I appreciate the opportunity to meet with President el-Sisi to discuss the concerns we have for the plight of religious minorities in Egypt. pic.twitter.com/toWQt2PF2R