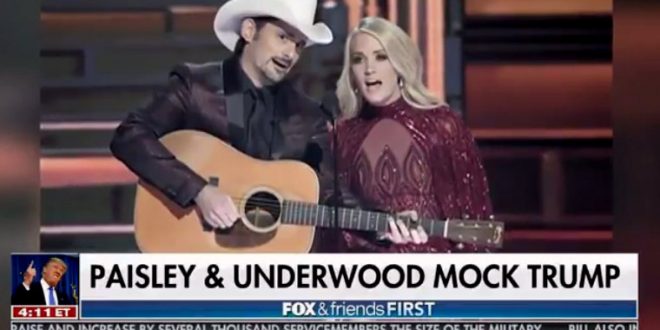 After Underwood informed Paisley that CMA guidelines said the show would be a “politics free zone,” Paisley joked that he wouldn’t be able to perform such parody songs as ““She Wrote a Memoir, Hillary’s Back,” “Hold Me Closer Bernie Sanders,” or “Stand By Your Manafort.”

But then, Paisley said screw it, and launched into a rendition of Underwood’s 2005 hit “Before He Cheats,” but with a few alterations to fit the song to the current president.

Loved Carrie b4 and I am big country music fan, i will never watch cma again and done with carrie, loved her music, but no more, Trump’s morals out trumped you by far, he has Godly morals, who did you get yours from, they are for sure not from God https://t.co/SyHdFgaAAC