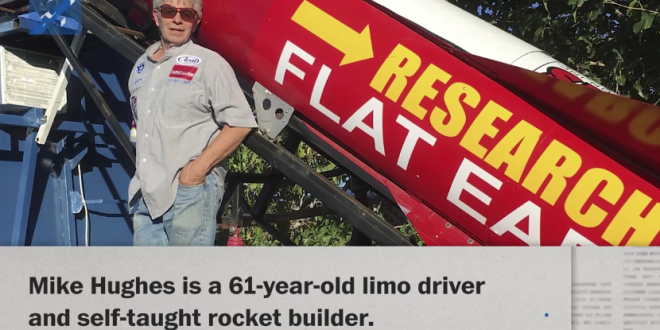 CALIFORNIA: Man To Launch Himself On Homemade Scrap-Metal Rocket To Prove The Earth Is Flat [VIDEO]

A California man who planned to launch himself 1,800 feet high Saturday in a homemade scrap-metal rocket — in an effort to prove that Earth is flat — said he is postponing the experiment after he couldn’t get permission from a federal agency to conduct it on public land.

Instead, Mike Hughes said the launch will take place sometime next week on private property, albeit still in Amboy, Calif., an unincorporated community in the Mojave Desert along historic Route 66.

“It’s still happening. We’re just moving it three miles down the road,” Hughes told The Washington Post on Friday. “This is what happens anytime you have to deal with any kind of government agency.”

A BLM spokeswoman said its local field office had no record of speaking with Hughes and that he had not applied for the necessary special recreation permit to hold an event on public land.