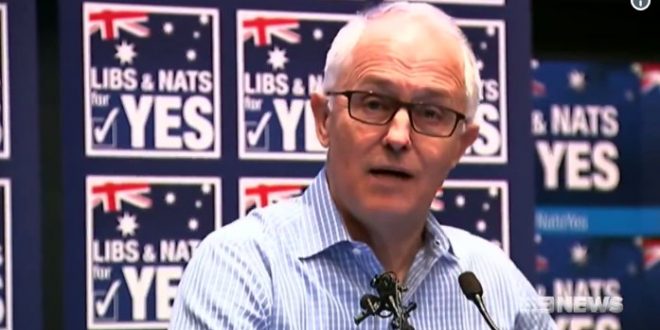 The government “would not countenance” legalising discrimination against same-sex weddings and a bill to do so would have “virtually no prospect” of passing parliament, Malcolm Turnbull has said in an extraordinary rebuke of conservatives demanding the rollback of anti-discrimination laws.

As conservative Coalition MPs and senators rallied around the same-sex marriage bill released on Monday by Liberal senator James Paterson, Turnbull slapped them down ahead of the release of marriage law survey results at 10am on Wednesday.

Turnbull’s intervention contrasted with calls from Tony Abbott to do more to protect religious freedom than the Dean Smith marriage bill and “entrench the right to dissent from any new orthodoxy”. The Paterson bill has been criticised by lawyers, marriage equality advocates and the attorney general, George Brandis, for allowing discrimination against same-sex weddings by commercial service providers.

NOTE: 10am Wednesday in Sydney is 6pm today in New York City. I’ve got a live survey result post scheduled to go up at 5pm. The YES side is planning events in multiple cities, the NO side has nothing planned. Good sign?