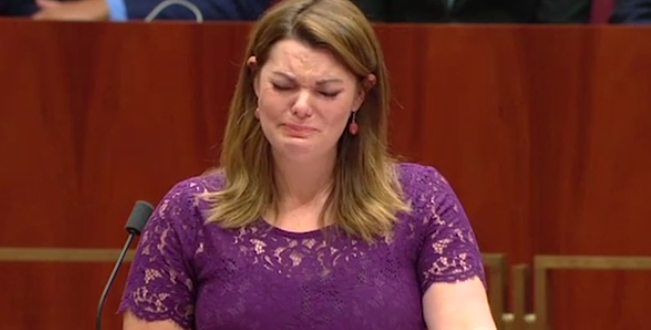 An emotional Sarah Hanson-Young has broken down in parliament while speaking on the bill to make gay marriage legal today.

The South Australian Greens senator could not fight her tears, or running mascara, as she issued a heartfelt apology to her former party leader Bob Brown, a gay man and LGBTIQ rights activist, that parliament was not able to make same-sex marriage legal before he retired.

She also blasted former Prime Minister John Howard’s move in 2004 to change the Marriage Act to specifically make marriage between a man and a woman, which she called a bid to “single-handedly outlaw love”.

“When Bob retired in 2012, I said to him, Bob I’m really sorry that we haven’t been able to reverse that awful law before your time was up,” Senator Hanson-Young said. “So today … today, I stand here with my Greens colleagues finishing the job that Bob Brown started.”

In earlier Senate debate on the bill, the leader of the Australian Conservatives, Cory Bernardi, conceded that “this bill is going to pass” and although he would push to protect “religious freedom and freedom of speech”, he acknowledged “the numbers are against us”.

“You guys have the numbers to do whatever you want with this bill– to go forward,” he said. “I would only ask that you consider some of our concerns.”

Senator David Leyonhjelm has tabled amendments to allow civil celebrants and private service providers to refuse same-sex weddings but conservatives including Liberal David Fawcett have conceded they do not have the numbers to reintroduce commercial discrimination.

Prime Minister Malcolm Turnbull has promised that same-sex marriage will be a reality by Christmas and it appears that any attempt to stop it will now be fruitless.