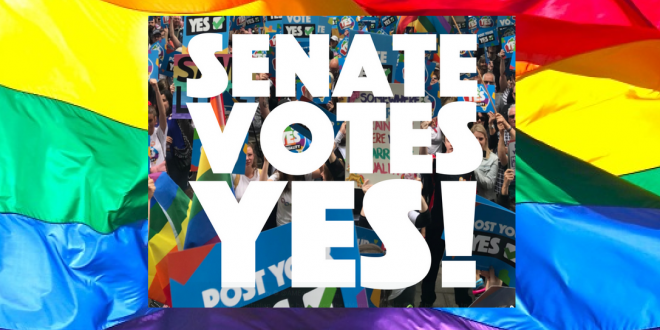 The Australian Senate has passed a same-sex marriage bill, the first marriage equality bill to pass either house of federal parliament, succeeding where more than 20 previous attempts have failed.

Two weeks after the announcement that 61.6% of those who participated in the unprecedented national postal survey voted in favour of same-sex marriage, the Senate passed the cross-party bill unamended.

The bill will now go to the House of Representatives, where it is expected to pass easily next week, fulfilling the Turnbull government’s promise to facilitate a marriage equality bill in the event of a yes vote and legislate the historic social reform before Christmas.

The cross-party bill passed the Senate 43 votes to 12 as almost all Labor senators, the Greens, the Nick Xenophon Team, Derryn Hinch and members of the ruling Liberal-National Coalition voted in favour.

BREAKING: Australian Senate has passed the #MarriageEquality bill by 43 votes to 12! This is historic — and it’s because of you. We did this together!

Next week it heads to the House of Representatives. It’s time for our MPs to get this done. pic.twitter.com/5mFJlZPktw

The Australian Senate has just passed marriage equality. The Ayes are on the left of the chamber. 43 yeses to 12 noes.
I stayed up until 2.35am in the morning for this. I’m speechless. Well done, Australia. #auspol #lovewins #EqualMarriage pic.twitter.com/0du4goZFG9