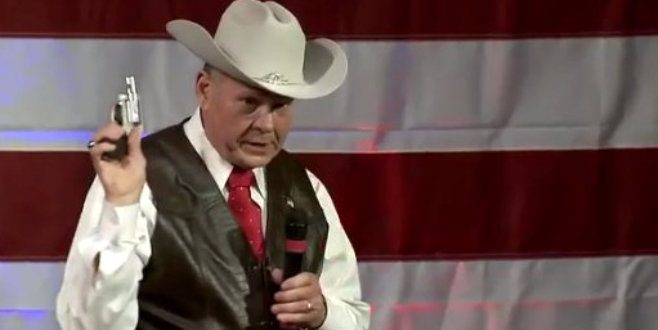 ALABAMA: Yet Another Moore Accuser Claims He Groped Her In 1991 When He Was Already Married

A Gadsden woman says Roy Moore groped her while she was in his law office on legal business with her mother in 1991. Moore was married at that time. In the past week, Moore has been accused by five other women of a range of behaviors that include sexual misconduct with a woman when she was 14, and sexual assault of another when she was 16. This is the first public accusation of physical contact that happened after Moore was married.

According to Johnson, he asked questions about her young daughters, including what color eyes they had and if they were as pretty as she was. She said that made her feel uncomfortable, too. Once the papers were signed, she and her mother got up to leave. After her mother walked through the door first, she said, Moore came up behind her. It was at that point, she recalled, he grabbed her buttocks. “He didn’t pinch it; he grabbed it,” said Johnson. She was so surprised she didn’t say anything. She didn’t tell her mother.

In a above-linked article, a different woman says that Moore asked her out when she was 17 years old, telling her, “I go out with girls your age all the time.”