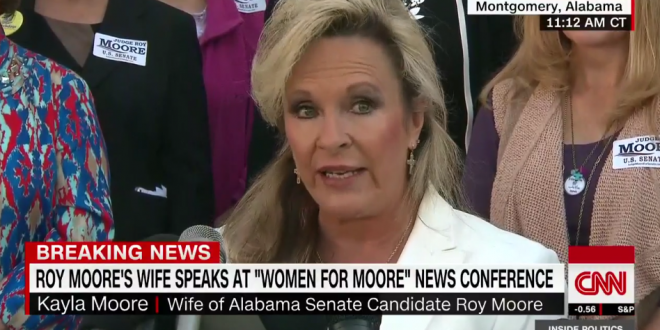 ALABAMA: Kayla Moore Claims Trump Owes Them A Thank You For Taking Attention Away From Russia

Kayla Moore appeared at a Women For Moore rally in Alabama just now to attack the media, the DNC, the Human Rights Campaign, and anybody else who objects to her husband’s hatred of “transgender bathrooms” and “transgenders in the military.”

There was the usual blather about “God-given rights” and other Christianist tropes, but most are keying in on Kayla’s assertion that Donald Trump owes them thanks for taking focus off the Russia scandal. Seriously.

Kayla Moore defends her husband, Alabama Senate candidate Roy Moore, amid mounting allegations of sexual abuse: All of the same people “who were attacking President Trump are also attacking us” https://t.co/3SfsI6S2nQ

Kayla Moore: “All of the very same people who were attacking President Trump are also attacking us – I️ personally think he owes us a thank you, have you noticed we’re not hearing about Russia?” pic.twitter.com/kIgADaG0LU

Roy Moore’s wife says President @realDonaldTrump should be thanking him: “Have you noticed you’re not hearing too much about Russia?” pic.twitter.com/tvax42APwO

Roy Moore’s wife, Kayla Moore, stands by her husband’s side and says “he will not step down” from the Senate race https://t.co/6Yge8wQYIP

Previous Menendez Warns Enemies: To Those Who Were Digging My Political Grave, I Know Who You Are [VIDEO]
Next Jesse Jackson Reveals Parkinson’s Diagnosis