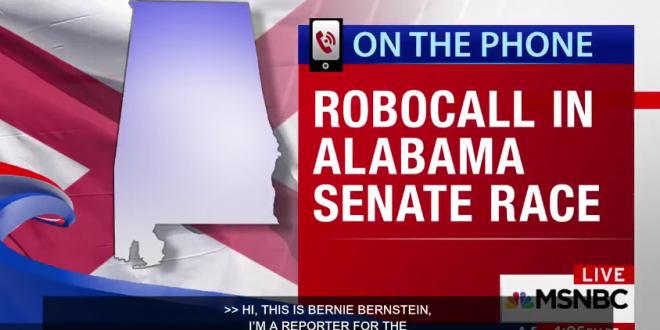 “Hi, this is Bernie Bernstein, I’m a reporter for the Washington Post calling to find out if anyone at this address is a female between the ages of 54 to 57 years old willing to make damaging remarks about candidate Roy Moore for a reward of between $5000 and $7000 dollars.

“We will not be fully investigating these claims however we will make a written report. I can be reached by email at [email protected], thank you.” – From the fake robocall, delivered in a stereotypical Jewish/New York accent, sent out in Alabama today.

Breitbart has reported on the call without questioning its authenticity. Interesting, yes?

This Bernie Bernstein robocall may well be the most boneheaded, bush league, transparent political hackery of the modern era, and that’s saying something. Day before the election? Maybe it could help. A month??? It’s going to end the careers of everyone involved with it.

Very disappointed in you, Alabama GOP. You come up with a fake Washington Post reporter for a robocall and the best you have is Bernie Bernstein? Holy anti-Semitic, Batman. I mean FFS, Trump has about a thousand fake identities to lend you out. Should have assigned John Miller.

A robocall claiming to be from the Washington Post is calling Alabama households looking for dirt on Roy Moore. The robocalls use the Jewish-sounding fake name “Bernie Bernstein.”

“who’s the most liberal person we know”
“bernie sanders”
“ok, but we can’t use that name”
“bernie …….. bernstein”https://t.co/2oJJCgGHAc