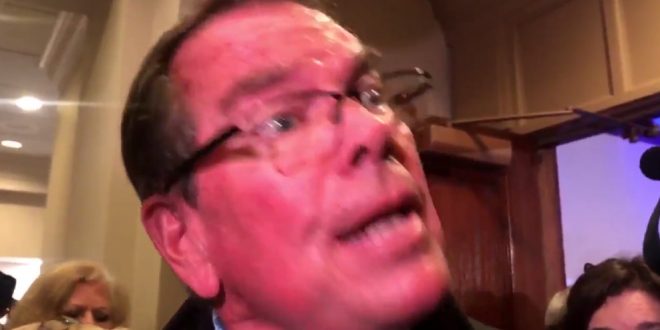 After the conclusion of today’s bizarre “press conference” with Roy Moore, hate group leader Janet Porter invited questions “about the issues” from the throng of reporters. Unsurprisingly, all anybody wanted to ask about was the allegations against Moore.

As the questioning continued, Porter shouted several times that she “paid for this microphone” – meaning that only approved questions would be responded to.

Eventually Moore and his wife fled to the exit, prompting an exasperated Porter to snark at the reporters, “Well, we appreciate you coming. You probably got more church today than you’ve had in the last ten years.”

But as you’ll see below, that wasn’t the end of it as Moore supporters Alan Keyes and nutjob Flip Benham took turns screaming at reporters out in the hall. Also watch below for the female Moore supporter raging at the assembled “fake news” media. What a shit show.

Then, the people who spoke in Support of Moore got in heated arguments with Reporters trying to ask questions: pic.twitter.com/L393ZQWhdO

Flip Benham, who spoke in support of Moore during event, argued with reporters after. pic.twitter.com/g1a9amcrUx