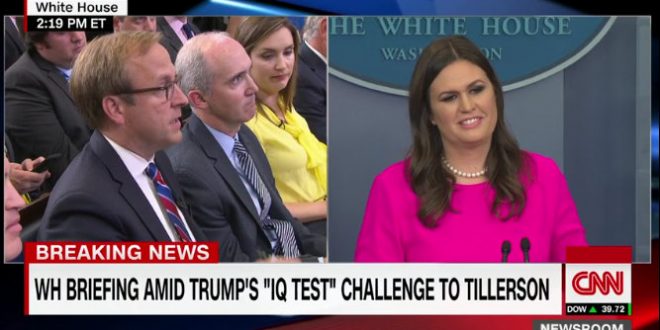 President Trump did not imply he was smarter than Secretary of State Rex Tillerson, his top spokesperson said Tuesday, claiming his offer for both to take an IQ test was a joke. “The president certainly never implied that the secretary of State was not intelligent. He made a joke. Nothing more than that,” White House press secretary Sarah Huckabee Sanders told reporters Tuesday. Sanders said the two men “had a great visit at lunch” and reiterated Trump has confidence in his secretary of State.

“He made a joke. Maybe you guys should get a sense of humor and try it sometime.”

A joke like making fun of a disabled reporter? Or a joke like encouraging law enforcement to bash the heads of suspects?

Sarah Sanders says President Trump’s IQ line was “a joke” and he has “full confidence” in the Secretary of State https://t.co/0ZPO4vkx0G

Sorry losers and haters, but my I.Q. is one of the highest -and you all know it! Please don't feel so stupid or insecure,it's not your fault

Previous SPAIN: Catalonia President Declares Independence But Suspends Action To Allow For Talks With Madrid [VIDEO]
Next World Net Daily: God’s Secret Messages In Willy Wonka Can Be Seen In The Incineration Of Wicked Veruca Salt