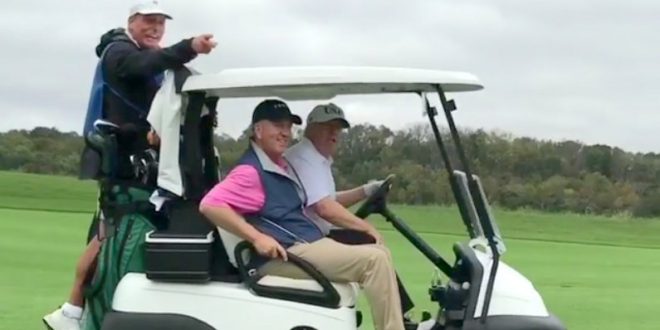 According to NBC News, President Donald Trump has, since taking the Oath of Office, spent 73 days at one of his golf courses. A few pictures have emerged during that time, but not much footage of Trump playing has gone public. Until now.

After two quick practice swings, the President stepped up and hit a mid-iron to what seemed like a good spot — given the reaction of his playing partners. No one, of course, admired the shot more than Trump — who apparently also cranked his drive. “You didn’t know Trump could hit two shots like that, did you?” Trump said to a few other golfers as he drove past.

Scroll over the image for the play button.

Previous Yet Another Trump Nominee Withdraws Under Fire
Next LOS ANGELES: Trial Begins For Man Charged In Torture Death Of Boy He Thought He Was Gay [VIDEO]