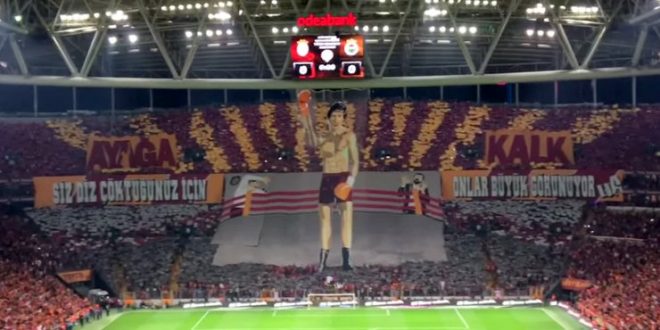 The banner unfurled at Sunday’s match featured an image of the character portrayed by actor Sylvester Stallone and was framed by the words “Rise Up” and a slogan reading: “They Look Big Because You’re on Your Knees.”

Pro-government Twitter accounts alleged that the display was inspired by the words of Fethullah Gulen, a Muslim cleric blamed by Turkey’s government for a coup attempt last year.

Gulen lives in self-imposed exile in the Poconos of Pennsylvania, while Rocky has a statue dedicated to him in Philadelphia, his home town and Pennsylvania’s largest city. “Pennsylvania” is used as shorthand in Turkey for references to Gulen and his following, which the government has classified as a terrorist organization.

As you’ll see in the clips below, the banner was raised to Bill Conti’s Gonna Rise Now, which was followed Survivor’s Eye Of The Tiger.