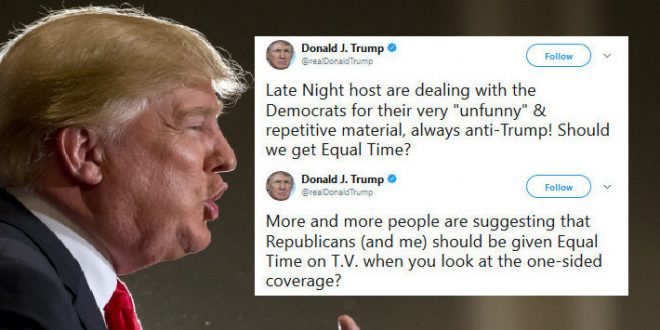 President Donald Trump is pushing back against late night television show hosts who have been sharply critical of Republicans. The president took to Twitter Saturday morning to argue that Republicans should be given “equal time” because of the “one-sided” coverage, an apparent reference to Federal Communications Commission rules dealing with candidates during elections.

Late Night host are dealing with the Democrats for their very "unfunny" & repetitive material, always anti-Trump! Should we get Equal Time?

More and more people are suggesting that Republicans (and me) should be given Equal Time on T.V. when you look at the one-sided coverage?

We'd love to have you! Studio located at 15 Penguin Avenue, Antarctica. https://t.co/2MyQTYwecZ