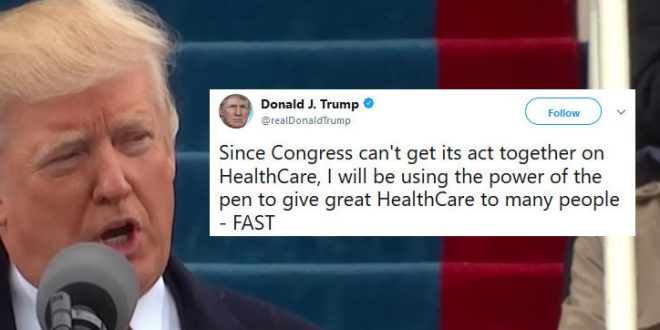 President Donald Trump on Tuesday pledged to take executive action on health care, saying he would go around Congress to provide new insurance options for Americans. Trump didn’t provide additional detail on what executive action he would take and the White House didn’t immediately respond to a request for comment.

The Wall Street Journal reported last week that Trump would sign an executive order to lift some of the insurance regulations set by President Barack Obama’s Affordable Care Act, including looking at ways for people and organizations to join together to buy insurance plans. Republican Senator Rand Paul has been encouraging Trump to take executive action to allow for so-called “association health plans.”

Since Congress can’t get its act together on HealthCare, I will be using the power of the pen to give great HealthCare to many people – FAST