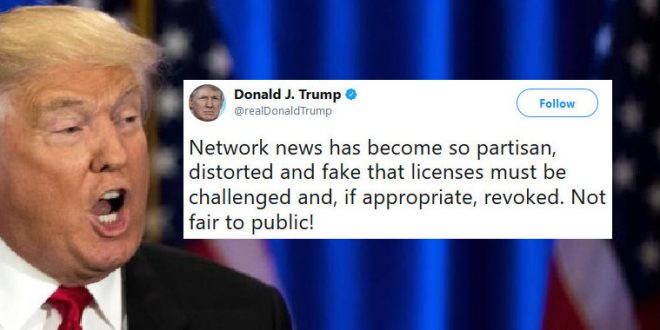 As everyone in the country seems to know except Hair Furor, broadcasting licenses are granted to individual stations, not networks. But here we go again:

President Trump is doubling down on his suggestion that the federal government “challenge” the broadcast licenses of networks that report what he deems “fake news.”

“This threat alone could intimidate the press and lead to skewed and unfair reporting,” Rep. Frank Pallone Jr. (D-N.J.) warned on Wednesday, following Trump’s comment that NBC’s license should be challenged. He and other Democrats called on FCC Chairman Ajit Pai to publicly condemn the president’s suggested action.

“Now, the FCC must show that it is loyal to the law, not the president, and make clear that it rejects this kind of interference,” Sen. Brian Schatz (D-Hawaii). said in a statement.

Network news has become so partisan, distorted and fake that licenses must be challenged and, if appropriate, revoked. Not fair to public!

So, you’re really trying to take away the right to a Free Press so you can become the dictator you’ve always wanted to be, is that it?

There aren’t any “network news licenses,” you fascist baboon pic.twitter.com/jowpH86X1c

Again: This is a direct threat at the free and independent press. https://t.co/ejFy5u5GXN