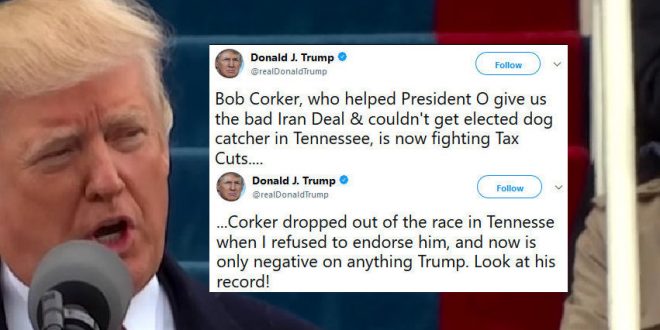 GOP Sen. Bob Corker was on television this morning and of course “too busy to watch TV” Trump was watching.

Republican Sen. Bob Corker today stood by his remarks criticizing the White House as an “adult day care center” and arguing that President Trump is putting the United States on a path toward “World War III.” “I don’t make comments I haven’t thought about,” the Tennessee senator said in an interview with “Good Morning America.”

“When you look at the fact that we’ve got this issue in North Korea and the president continues to kneecap his diplomatic representative, the secretary of state, and really move him away from successful diplomatic negotiations with China, which is key to this, you’re taking us on a path to combat,” Corker said.

…Corker dropped out of the race in Tennesse when I refused to endorse him, and now is only negative on anything Trump. Look at his record!