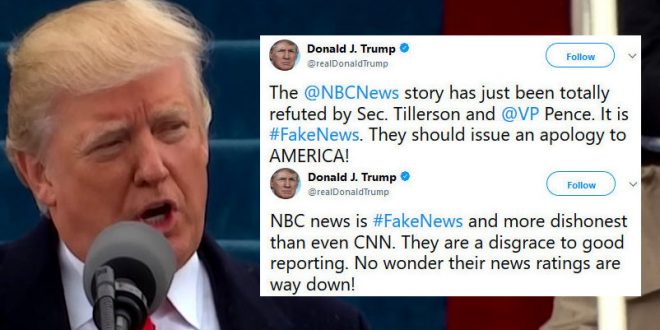 Trump is rage-tweeting from Air Force One on his way to visit Las Vegas victims. Seriously.

Secretary of State Rex Tillerson on Wednesday said he has “never considered leaving” his job and is committed to President Donald Trump’s foreign policy goals.

On Wednesday, NBC News reported that Tillerson came close to resigning this summer but was urged to stay in the job until the end of the year. He referred to Trump as a “moron” in July following a meeting with the president’s national security team, according to NBC, which cited multiple high-level administration sources.

“There has never been a consideration in my mind to leave,” the top American diplomat told reporters. “I serve at the appointment of the president and I am here for as long as the president feels I can be useful to achieving his objectives.”

Asked specifically whether he called Trump a “moron,” Tillerson stopped short of denying it. “I’m not going to deal with petty stuff like that. … I’m not going to be part of this effort to divide this administration,” the secretary of State said.

Dan Scavino Jr., assistant to the president and director of social media at the White House, tweeted the exact comment that Mr. Trump’s Twitter account made at the same time, then deleted it.

This comes after President Trump undercut Tillerson in a tweet on Sunday, saying that America’s top diplomat “is wasting his time trying to negotiate with Little Rocket Man,” referring to North Korea leader Kim Jong Un.

Mr. Trump made the comment even after top administration officials have emphasized that their top priority is to figure out a diplomatic route to dismantling its nuclear program. In another tweet Sunday, Mr. Trump encouraged Tillerson to “save your energy,” adding “we’ll do what has to be done!”

NBC news is #FakeNews and more dishonest than even CNN. They are a disgrace to good reporting. No wonder their news ratings are way down!

The @NBCNews story has just been totally refuted by Sec. Tillerson and @VP Pence. It is #FakeNews. They should issue an apology to AMERICA!

Not quite totally refuted: Tillerson declined to comment on whether he had called Trump a moron. Let’s call it a non-denial denial https://t.co/7yDpNc5F9S

The @NBCNews story has been partially refuted by Sec. Tillerson. Even though I told him to refute it all, he didn’t deny calling me a MORON! https://t.co/m0UUPTiEHP

Dan Scavino on a roll today. It also wasn’t “totally refuted.” He wouldn’t say whether he called Trump a moron. https://t.co/Rs7F9Z3ot9

Previous REPORT: Ivanka And Junior Were Nearly Indicted On Felony Fraud Charges Until Donation By Trump Lawyer
Next Trump Now Most-Followed Current World Leader On Twitter (But More Than Twice As Many Follow Obama)