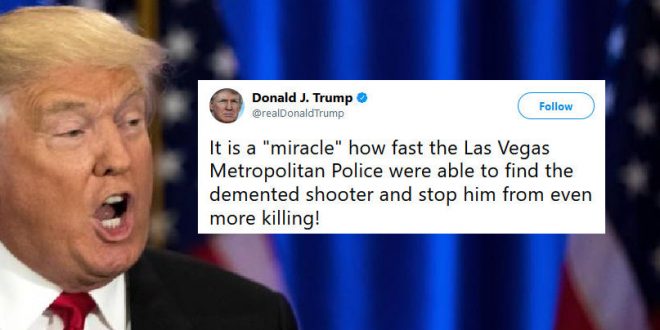 The miracle of smoke alarms:

President Trump said Tuesday it was a “miracle” how quickly the Las Vegas police were able to respond to the mass shooting that left nearly 60 people dead on Sunday night.

Trump made the remarks on the eve of his trip to Las Vegas on Wednesday, when he is expected to meet with victims’ families and first responders.

The attack has reignited the gun debate among lawmakers in Washington, D.C., with a number of Democrats calling for stricter gun regulations.

It is a “miracle” how fast the Las Vegas Metropolitan Police were able to find the demented shooter and stop him from even more killing!

It’s not a miracle. Stephen Paddock fired so many bullets after killing so many people that the smoke detectors went off.

So literally, there so so much smoke from his machine gun that it set off the alarms and allowed the police to find him.

Why is miracle in quotes? Do you know how to use the English language?