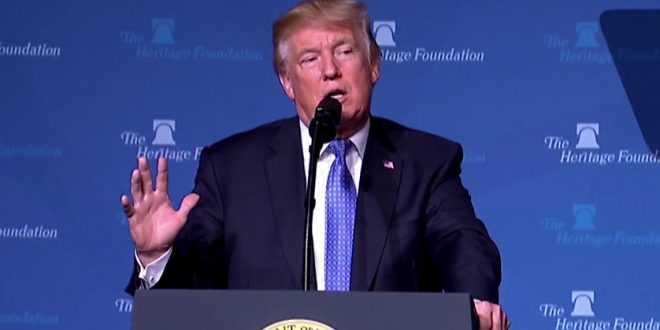 Trump Keynotes For Major Anti-LGBT Group, Hails Them As “Titans In Fight To Defend Our American Heritage”

President Trump hailed conservatives at the Heritage Foundation known for opposition to LGBT rights Tuesday night as “titans in the fight to defend, promote and preserve our great American heritage.”

“Everyone here tonight understands a core truth, that for America to have confidence in our future, we must have pride in our history,” Trump said. “As Americans, we have inherited a special legacy of freedom, culture, laws, traditions and values.”

Trump also praised the Heritage Foundation for its faithfulness to strict interpretation of the U.S. Constitution — often cited as excuse for opposition to the U.S. Supreme Court’s ruling in favor of same-sex marriage nationwide. “We believe that the Constitution is the greatest political document in human history and that judges should interpret the Constitution as written,” Trump said.