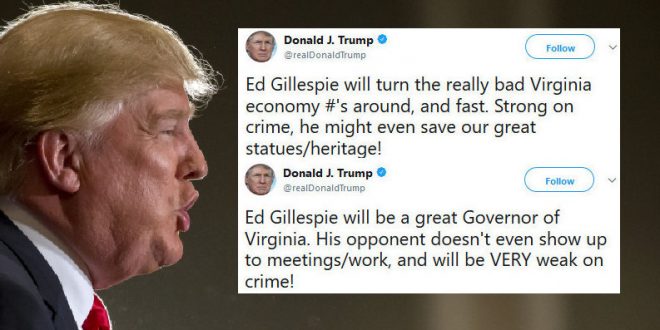 President Trump on Thursday again weighed into the Virginia governor’s race, arguing Republican nominee Ed Gillespie “will be a great governor” and slamming Gillespie’s Democratic opponent. Trump has previously tweeted support for Gillespie, who is running against Lt. Gov. Lt. Gov. Ralph Northam (D) in the Nov. 7 election. Northam quickly fired back, pointing to service in the Army and as a physician.

Ed Gillespie will turn the really bad Virginia economy #’s around, and fast. Strong on crime, he might even save our great statues/heritage!

Ed Gillespie will be a great Governor of Virginia. His opponent doesn’t even show up to meetings/work, and will be VERY weak on crime!

I served 8 years in the Army, took care of sick kids, and am running to build a more inclusive Virginia. Don’t talk to me about showing up. https://t.co/jzDx9bS6mh