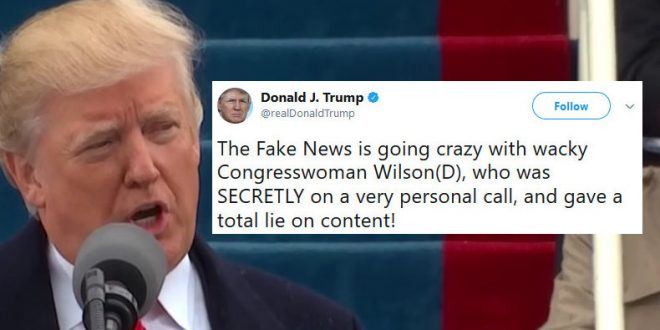 President Donald Trump resorted to name-calling in a tweet late Thursday, blasting a congresswoman as “wacky” for criticizing his condolence call to the widow of a Florida soldier slain in Niger.

Wilson, who has known the soldier’s family for years, was traveling in a car this week with pregnant widow Myeshia Johnson when Trump’s call came in offering his condolences for the Oct. 4 death of Army Sgt. La David Johnson.

Trump insisted that Wilson “totally fabricated” the account, and that he had “proof.” Statements defending the president’s handling of the call by White House chief of staff John Kelly and senior adviser Kellyanne Conway on Thursday didn’t challenge Wilson’s account of what Trump said.

The Fake News is going crazy with wacky Congresswoman Wilson(D), who was SECRETLY on a very personal call, and gave a total lie on content!