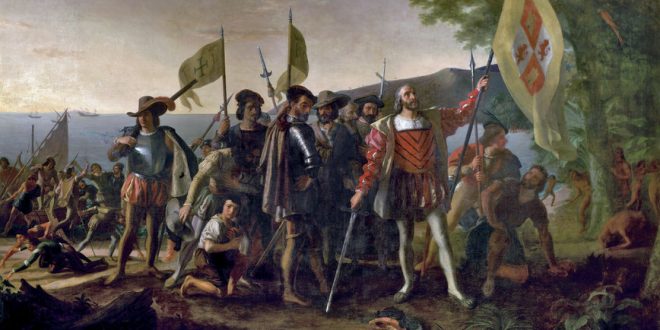 Columbus Day has become a fraught holiday in the United States, but you wouldn’t know it from President Trump’s official proclamation. Published on the official White House website, the statement heralds Christopher Columbus for “setting the stage for the development of our great Nation” and “inspiring countless others to pursue their dreams and convictions—even in the face of extreme doubt and tremendous adversity.”

Trump’s statement referenced Columbus’s Italian heritage and praised the manifold contributions of Italian Americans, including Columbus’s own contribution of the “critical first link in the strong and enduring bond between the United States and Europe.” (It became a federal holiday in 1937 after much lobbying by the Knights of Columbus, a Catholic fraternal organization, and other prominent Italian Americans.)

Many Americans in recent years have begun celebrating “Indigenous Peoples’ Day” on the second Monday in October, and 16 U.S. states do not recognize Columbus Day as a public holiday. South Dakota has celebrated Native American day for nearly 30 years.

Five hundred and twenty-five years ago, Christopher Columbus completed an ambitious and daring voyage across the Atlantic Ocean to the Americas. The voyage was a remarkable and then-unparalleled feat that helped launch the age of exploration and discovery.

The permanent arrival of Europeans to the Americas was a transformative event that undeniably and fundamentally changed the course of human history and set the stage for the development of our great Nation.

Therefore, on Columbus Day, we honor the skilled navigator and man of faith, whose courageous feat brought together continents and has inspired countless others to pursue their dreams and convictions — even in the face of extreme doubt and tremendous adversity.