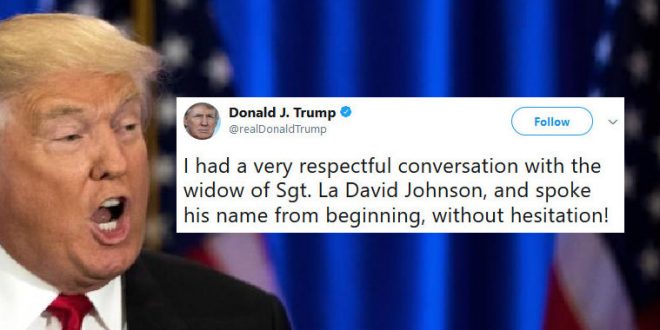 As always, Trump is spending his morning watching TV.

The widow of one of four soldiers killed in Niger went on television on Monday to criticize President Trump for how he spoke to her during a condolence call last week, saying the president blundered through the conversation and only deepened her grief because he did not seem to know her husband’s name.

She went on and said, “Whatever Ms. Wilson said was not fabricated. What she said was 100 percent correct.” After the interview aired, Mr. Trump wrote on Twitter that he had a “respectful conversation” with Ms. Johnson, disagreeing that he stumbled over Sergeant Johnson’s name.

I had a very respectful conversation with the widow of Sgt. La David Johnson, and spoke his name from beginning, without hesitation!

Oh yeah so the widow must be the one lying right? You are disgusting

Holy Cow! When is it going to end? Just let it go already! You are the only one who is dragging this on and continuing to drag this family into your ridiculous mess.