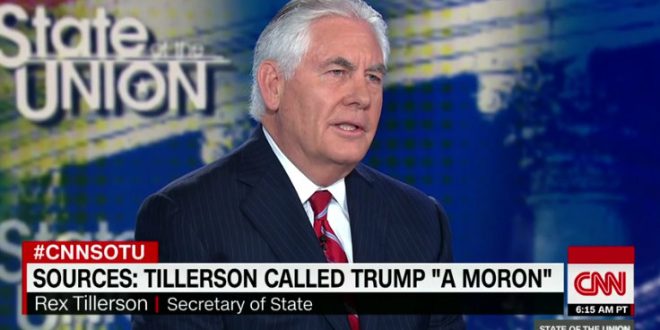 Jake Tapper asked Secretary of State Rex Tillerson this morning rather directly if he did, in fact, call President Trump a moron. Tillerson did not deny it last week, and despite how much Jake Tapper pressed him on it this morning, Tillerson refused to “dignify the question.”

Tapper made it abundantly clear to him that if he continues to just avoid the question instead of issuing a firm denial, people will think he said it. Tillerson told him, “You want to make a game out of it.” He did not, however, deny it.

.@jaketapper: Did you call Trump a moron?

“I’m not going to dignify the question,” Tillerson AGAIN refuses to deny calling Trump a “moron” – this time in interview with @jaketapper

.@jaketapper, point blank to Tillerson: “You still haven’t denied that you called him a moron.” Still no denial. Trump not going to be happy