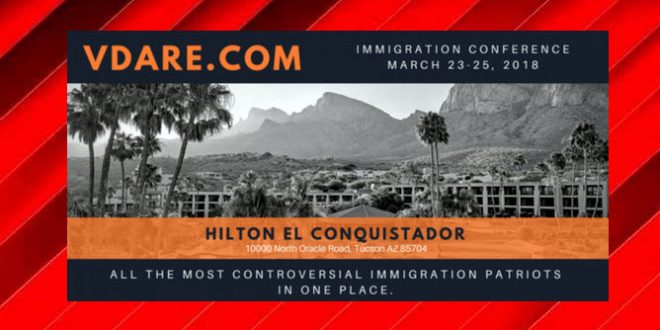 The Hilton El Conquistador in Tucson, AZ, has canceled plans to host an upcoming “immigration conference” by the white nationalist group VDare. It is the third time this year that VDare has unsuccessfully attempted to schedule a conference.

VDare is so bad that even the editor in chief for Breitbart privately called it “racist,” according to reporting by BuzzFeed (despite that private condemnation, Breitbart has publicly defended VDare).

RELATED: VDare takes their name from Virginia Dare, who was born in 1587 in the Roanoke Colony, North Carolina. White supremacists idolize her as the first child born to English parents in the New World. The settlement is known as the “Lost Colony” because when the site was returned to in 1590, all the houses had been dismantled and the 115 colonists, including then three year-old Virginia, had vanished with no trace of any battle.

ALSO RELATED: As I noted during last year’s live thread during the Republican convention, at least two pro-Trump tweets from VDare were featured on the venue’s screens. As you can see, they are rather proud about that.