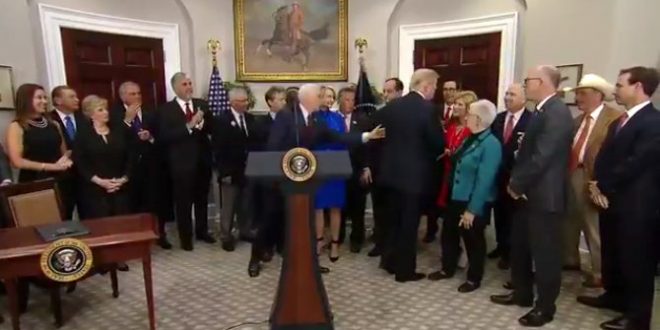 For Third Time, Trump Forgets To Sign Order, Starts To Leave Room Before Pence Calls Him Back [VIDEO]

I wasn’t watching the screen so I missed this.

President Trump had to be ushered back to sign his executive order peeling back parts of Obamacare, which he’s spent years bashing. The commander-in-chief began strolling out of the White House’s Roosevelt Room after delivering a full-throated rebuke of the Affordable Care Act.

“Thank you everybody,” the President said to applause as he bee-lined for the door. Meanwhile, the executive order sat across the room — without Trump’s signature. That’s when Vice President Pence is heard telling his boss, “Mr. President, you need to sign it.”

A White House reported for France 24 tweeted this was the third time the President has left without signing an executive order. The President was then seen catching himself, turning around and headed toward the desk.