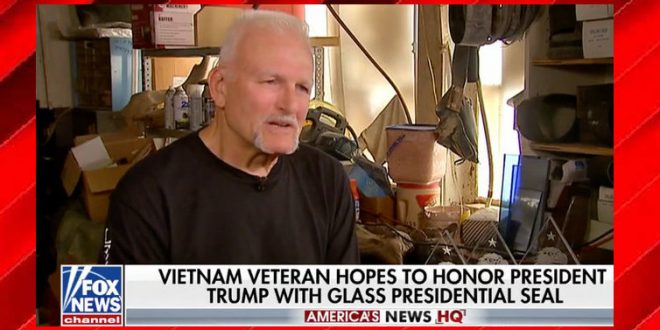 Navy veteran John Garofalo appeared on a Fox News segment this month, showing off a massive presidential seal he carved for President Trump while receiving praise for his service in Vietnam as a SEAL. The piece was broadcast nationally and featured cascading shots of all Garofalo’s medals. Online, it went viral, racking up 1.5 million Facebook views on Fox’s Facebook page.

But when Navy Times contacted Garofalo Thursday, Garofalo admitted he had lied and never served in Vietnam, never received a Purple Heart and was never a SEAL. Garofalo said he had falsely portrayed himself as a Vietnam vet and a SEAL for years. “It got bigger and bigger,” Garofalo told Navy Times in a telephone interview. “What I did I‘m ashamed of, and I didn’t mean to cause so much disgrace to the SEALs.”

An actual Navy SEAL who pursues these “stolen valor” cases says he told Fox News that Garofalo was a fake ten days ago, the day after the show aired, but they did nothing. He then turned to the Navy Times who confirmed his claims today. Tonight Fox News has posted a “correction” and an apology to their website.