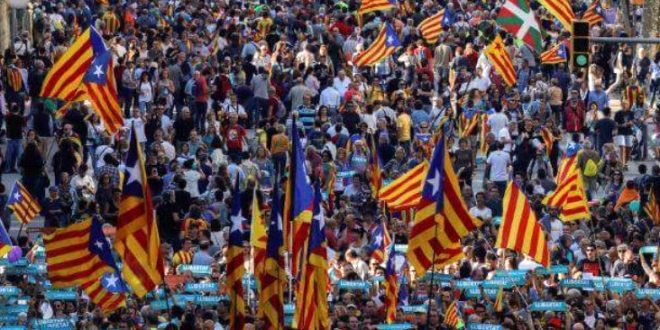 A pro-independence party in the Spanish region of Catalonia is calling for “mass civil disobedience.” They are upset about the Spanish government’s unprecedented decision and attempt to take over Catalonia’s government.

The political crisis has escalated to the point that Spain’s central government is, in essence, saying “we’ll take over now” as they seek to impose direct rule in Catalonia, CBS News correspondent Seth Doane reports. Some leaders in Catalonia are plotting their next move.

Catalan authorities will not follow orders from the Spanish government if Madrid moves to reassert control over the region, a senior official says.

Foreign affairs spokesman Raul Romeva told the BBC the central government was acting against the will of Catalans. Spain’s Prime Minister Mariano Rajoy has announced plans to sack the region’s government and curtail some of the freedoms of its parliament.

The Catalan parliament will meet on Thursday to decide on its response. The pro-independence leaders could decide to formalise a unilateral declaration of independence, the BBC’s Bethany Bell in Barcelona reports.

The European Commission says it has not changed its position on the Catalonia crisis after Spanish Prime Minister Mariano Rajoy moved to take back powers from the region.

Separatists have repeatedly called on the EU to weigh in and broker negotiations since violent police clashes marred the 1 October independence referendum, deemed illegal by Madrid and the courts.

Those calls were heightened on Saturday when Mr Rajoy announced that he would attempt to dissolve the regional government and force elections within six months by invoking Article 155 of Spain’s constitution.

Despite this, the European Commission has said its position “is well known” and it continues to “respect the constitutional and legal arrangement of Spain”.

It’s worth noting that virulently anti-EU Breitbart has strongly sided with the secessionists in daily articles.

“If fundamental values are at risk in #Catalonia, so they will be in #Europe. Democratically deciding the future of a nation is not a crime” pic.twitter.com/AmC7WMqqLm

Thousands hit on the street in #Barcelona to protest the decision by Spanish gov’t curbing the powers of #Catalonia. pic.twitter.com/81gmtocIYb

Video message update from @SimonManleyFCO on the negotiations on the UK’s exit from the EU, including on citizens rights @AlfonsoDastisQ pic.twitter.com/BiUeEzTgQU

Just listen to this chant of independence throughout the stadium pic.twitter.com/ucpD5hkhf9