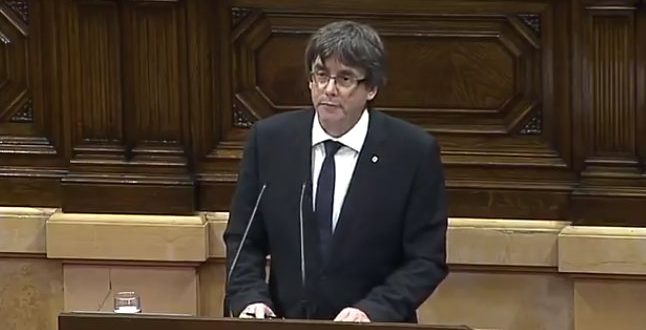 The leader of Catalonia, Carles Puigdemont, said on Tuesday evening that his region had earned the right to independence from Spain, but he immediately suspended the process to allow for talks with the central government in Madrid.

“I ask Parliament to suspend the declaration of independence so that in the coming weeks we can undertake a dialogue,” he said. In a long-awaited speech to the regional parliament in Barcelona, Mr. Puigdemont said that Catalonia had won the right to independence as a republic free from Spain, but left open the door to negotiations and to mediation.

Prime Minister Mariano Rajoy of Spain has rejected any dialogue with Catalan separatists unless they abandon plans for secession, and Mr. Puigdemont and his allies are now in danger of arrest for sedition, and the Catalan parliament at risk of being disbanded.

The opposition leader in Catalonia’s parliament says regional president Carles Puigdemont’s statement that he has a mandate to declare independence from Spain “is a coup” and has no support in Europe.

Opposition leader Ines Arrimadas of the Ciudadanos (Citizens) party says the majority of Catalans feels they are Catalans, Spanish and European and that they won’t let regional officials “break their hearts.”

Puigdemont says a landslide victory in the region’s disputed Oct. 1 referendum on independence gives his government grounds to implement its long-held desire to break century-old ties with Spain. Less than half of eligible voters cast ballots.

SUMMARY#Puidgrmont calls for independence of #Catalonia from Spain BUT wants talks w/ Madrid before full separationpic.twitter.com/CnuSZEIK5s

“Sr Puigdemont; you cannot suspend something that hasn’t been agreed.”#10Oct #Cataloniapic.twitter.com/kLbF3wVe2x

Catalonia: i want a divorce, but not yet.
Spain: So there’s still hope?
Catalonia: Not really I just worry you’ll beat me up if I go now.

Hundreds wait in front of the Catalonia’s Parliament pic.twitter.com/xO95v32jPZ

Catalonia have declared independence but not unilaterally. State calls for dialogue with Spain. [@CatalanEdition] pic.twitter.com/k2AVDSSomI