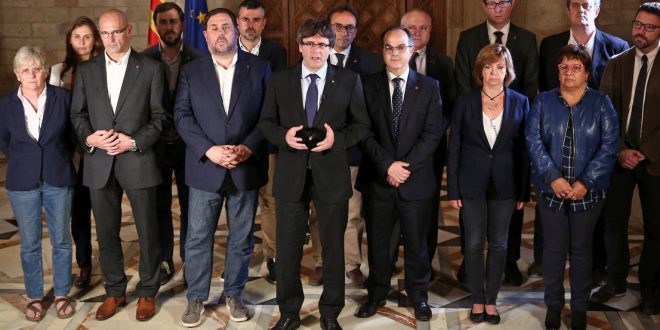 Catalonia’s regional government declared a landslide win for the “yes” side in a disputed referendum on independence from Spain that degenerated into ugly scenes of mayhem on Sunday, with more than 800 people injured as riot police attacked peaceful protesters and unarmed civilians gathered to cast their ballots.

Catalonia has “won the right to become an independent state,” Catalan president Carles Puigdemont said after the polls closed, adding that he would keep his pledge to declare independence unilaterally from Spain if the “yes” side wins.

“Today the Spanish state wrote another shameful page in its history with Catalonia,” Puigdemont added, saying he would appeal to the European Union to look into alleged human rights violations during the vote.

Catalan regional government spokesman Jordi Turull told reporters early Monday that 90 percent of the 2.26 million Catalans who voted chose the “yes” side in favor of independence. He said nearly 8 percent of voters rejected independence and the rest of the ballots were blank or void. He said 15,000 votes were still being counted.

The head of the Catalan regional government on Sunday opened the door to a potential declaration of independence of Catalonia from Spain after a day of tensions in the northeastern region where police were deployed to thwart an independence vote.

“On this day of hope and suffering, Catalonia’s citizens have earned the right to have an independent state in the form of a republic,” Carles Puigdemont said in a televised address, surrounded by members of his government.

“My government, in the next few days will send the results of today’s vote to the Catalan Parliament, where the sovereignty of our people lies, so that it can act in accordance with the law of the referendum,” he also said.

“Today Catalonia has gained its sovereignty and respect”
— Statement by President @KRLS on the #CatalanReferendum https://t.co/HdGd87CldN pic.twitter.com/TGyu6suTVN

A day marred by violence! Over 760 people injured in clashes with police in Catalonia pic.twitter.com/NhKTu0RTXG